Manifesto to stimulate the growth of author`s cinema

Most emerging creators, and even those who are already established, who choose to do a personal creation, need at some point the help of a public or private cultural institution, for the production phase, as well as the exhibition phase, or both.

In most of them, being optimistic, you will find structures created from the political and economic interest and not from the artistic and cultural prism. In these «deterrence centers» you will find elitism, hermeticism and little real help.

Recently, in a well-known «Institution», being received by one of those guards of the official cultural traffic, the Manager «hit» me with the following phrase:

«We do not help to grow green herbs, we only help solvent producers and we pull from above»

That, in the transgenic botanical selection of a plantation would make sense, is an aberration talking about people and creators. There should be genuine support for young promises; for those who start for the first time or for those who have been demonstrating their worth for years.

We believe that every creator, thinker, scientist or artist, is a herb that is born with the will to be a splendid tree. What would have been off Mozart, Einstein, Warhol, Truffaut, or Steve Jobs … if their way had been blocked just at the beginning?

It is undeniable that we must start with a natural talent, the best possible preparation and a great vocation; but the solitary effort becomes as depilating as the exhaustion of the castaway. If no one gives you a hand, a support, an advice or an opportunity … you end up abandoning.

Quite contrary to wanting a” greenhouse of chosen ones”, with docile filmmakers in the service of local corporations, or TV channels, to make “tailor made» products (frozen vegetables, all the same), we invoke the great George Orwell in «Animal Farm” and we want a «Rebellion in the orchard»

We want fresh cultural products, with their own roots, different perfumes, flavors from each shore and each sea. Mountain air and the unmistakable aroma of truth that shines in the sun. Truths written, painted, filmed, recorded, and narrated … without fear: tall as sequoias or delicate as a saffron stamen. An art that has seeds! A seed culture that enlightens minds.

Almost in the second decade of the SXXI, the art and science, united more than ever, give us infinite possibilities of expression for the artist or the scientist. We don`t only want an entertainment industry, but exhibition platforms that rationally reverts the artist himself and allows the audience to enjoy those productions in an affordable way. Enough of feeding a system that has no mercy for the weakest. You have to be brave and build dreams!

We want to promote artists with free and plural visions that contribute to make a world more tolerant, away from the “one minded thinking”, making every voices heard in all areas. The truth is in every human being. It only takes one to explain it and another one to listen.

Join us in signing this manifesto, which, at first hand, supports the author’s Cinema, but which is a document of transversal vocation that goes beyond the cinematographic arts and is also in solidarity with the creators of art, literature, dance and the performing arts, architecture, cyber art, science, and of course! with the public, the consumer, to whom, ultimately, our work is directed to.

Here you have a copy of the original manifesto in Spanish signed by the prestigious actress Claudia Cardinale who supports the cause and the artists; 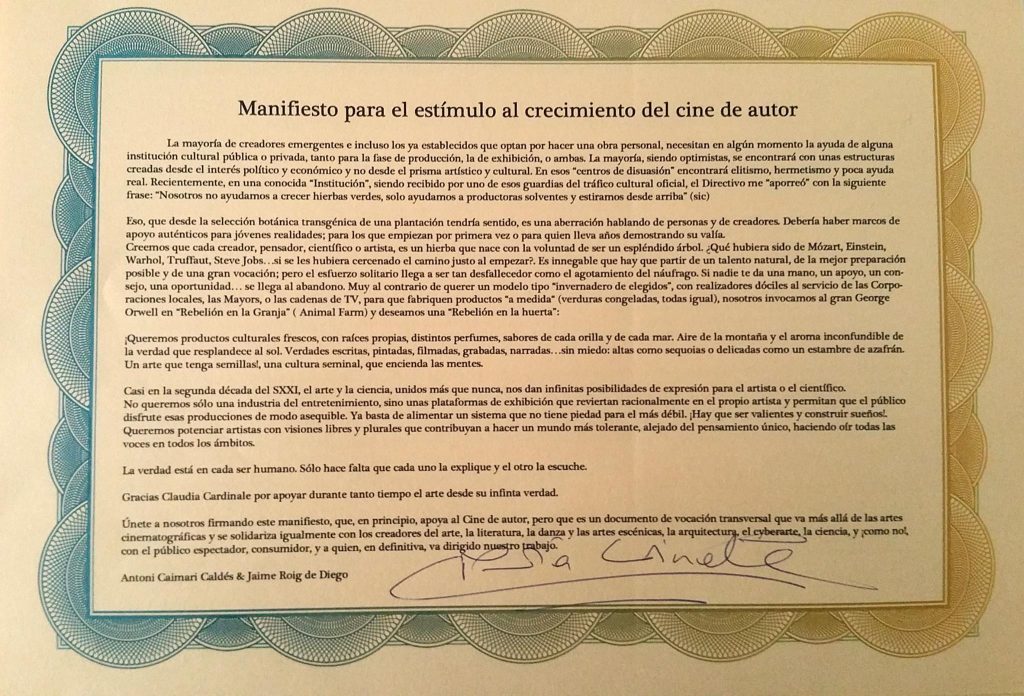